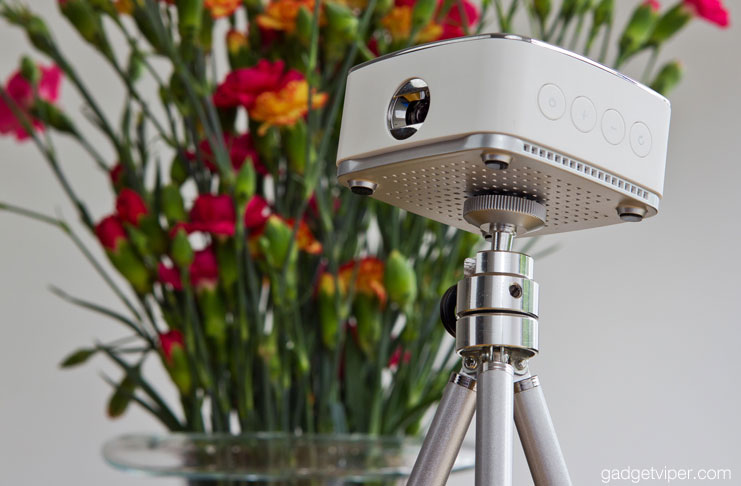 A WiFi enabled mini LED projector with a 4800mAh internal battery for 3 hours playback. The PURIDEA projector can Airplay effortlessly with an Apple device, stream media from a Smartphone or directly from a MicroSD card.

Featuring a very clean and simple to use operating system with step by step instructions. It comes with a remote control and a high quality telescopic mini tripod with a locking swivel ball.

PURIDEA portable projector – Buy Online
Amazon
price: $259.99*
view
*Product prices and availability are accurate as of the date/time indicated and are subject to change.
more »
Any price and availability information displayed on Amazon at the time of purchase will apply to the purchase of this product.

The PURIDEA portable wireless projector comes packaged in a premium quality presentation box, with the unit well protected inside a closed-cell mould.  Measuring just 7.5cm square with a height of 3.5cm, the projector is extremely compact and portable. 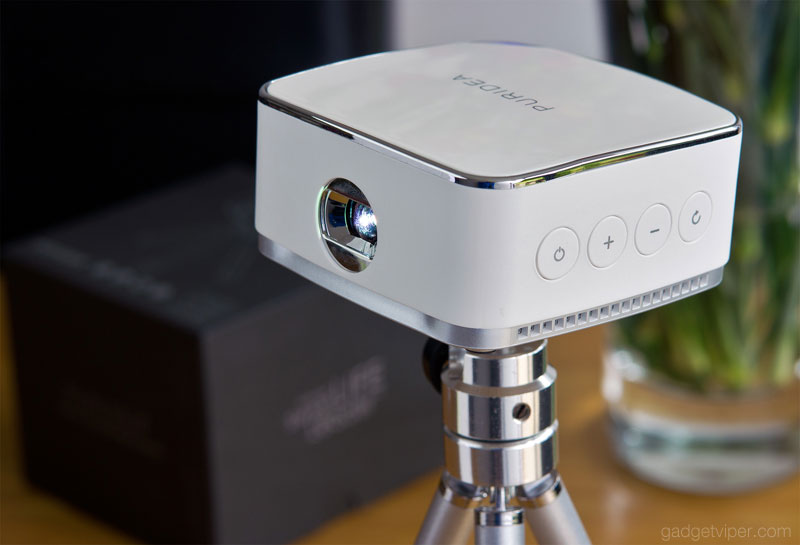 From a visual point of view, this is the best looking portable projector I’ve ever seen. It’s slightly curved top surface has a glossy finish, trimmed with chrome. In the bottom right corner in an angled LED indicator light. The LED will glow blue when it’s running off the internal battery and red when powered from the mains or an external power bank.

The rounded sides have an off-white matte finish with a metallic grey vented base.  On the rear there’s a micro USB input, AUX output, infrared remote receiver and a MicroSD card slot.

Underneath the MicroSD slot is a pin sized hole. Commonly found on routers, if you poke something small in it, the device will reset. 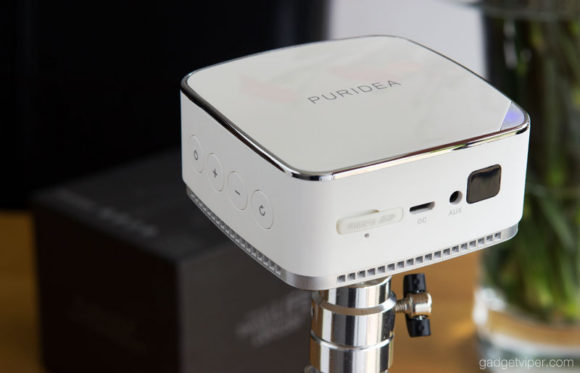 The four round control buttons sit flush along the right side of the PURIDEA projector. The power button requires a long press to turn the unit on and off or a short press to activate the menu. On the left side is a small scroll wheel to adjusts the focus distance.

On the underside of the projector, there’s a standard size threaded hole to attach a tripod. Having reviewed Mini projectors before, I was expecting a to find a bog standard tripod. Even the images on their product page show short legs.

What’s really cool about the tripod is that the slot on the head allows you to orientate the projector to face directly up.  A nice white ceiling makes the perfect movie screen when laying on your back! 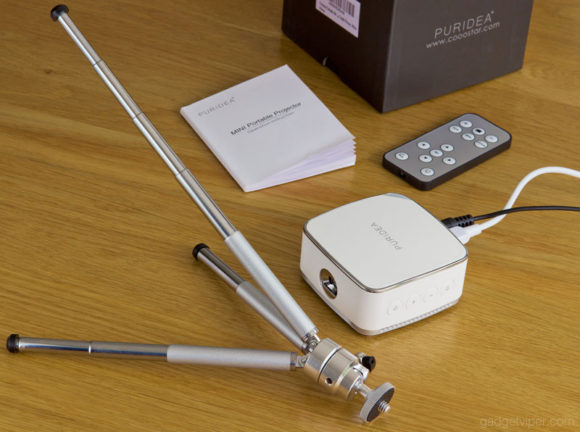 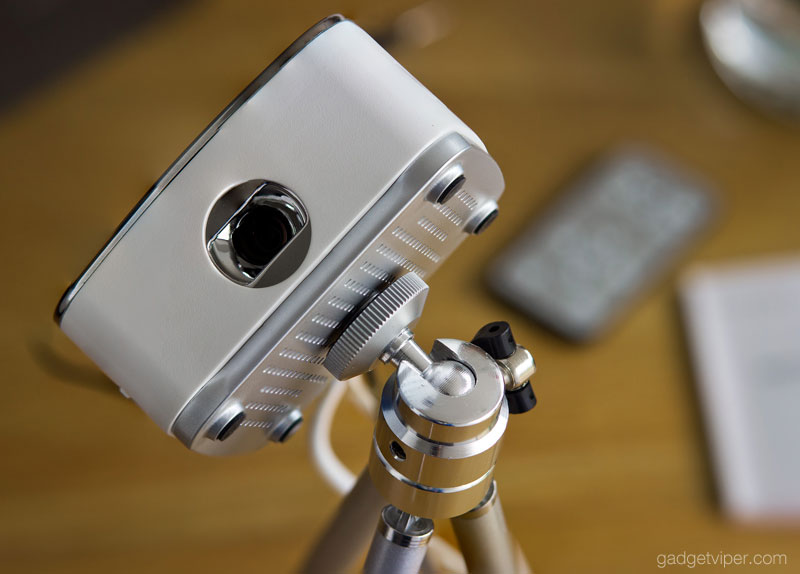 If you took the PURIDEA mini projector on a camping trip and wanted to project a movie against the angled interior of the tent, this tripod would be ideal.

The wall adapter plug that comes with the PURIDEA wireless projector has a detachable USB cable. This allows you to plug the USB into an external power bank, very handy if you’re outdoors or away from a power source.

The pocket size remote is fairly basic but perfectly fine for navigating the projector’s operating system. 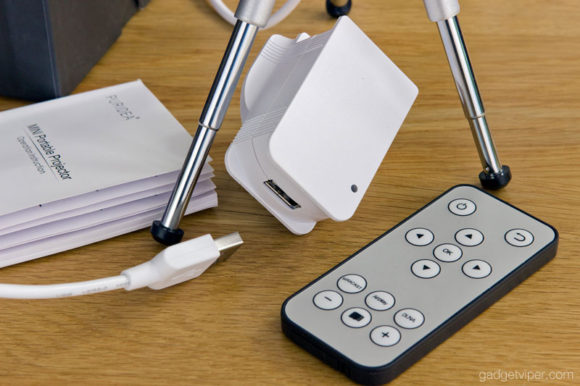 The overall build quality and design of the PURIDEA wireless projector and its accessories is top notch. If someone slapped an Apple logo on this, it would not look out of place.

As I’ve previously mentioned, the operating system on the projector is extremely clean and user-friendly. Initially, the OS was in a rather unattractive yellow and not particularly appealing to look at. Fortunately, after I had entered my WiFi details, I was able to perform a software update. On completion, the background changed to white, which I think is far more appealing.

There are three main headings; IOS, Android, Windows. Each area displays a very simple on-screen instructional guide.  Below the main headings there’s DLNA, WiFi, Settings and a MicroSD shortcut. Everything on the system is very self-explanatory and user-friendly to the point that you don’t even need to look at the user manual. 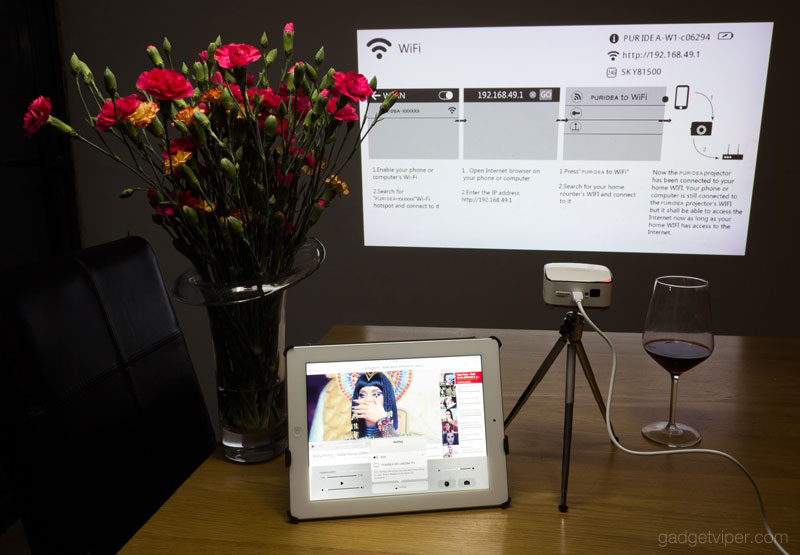 Using the PURIDEA wireless projector with an Apple device really was a flawless experience. Once the WiFi connection is established, your iPad or iPhone will display the PURIDEA device on its list of Airplay devices.

I streamed high-quality videos from the iPad and also used the YouTube app. The PURIDEA took about 8 seconds to begin casting and there was absolutely no buffering during playback. Having had limited success Airplay and Mini LED projectors, it was great to see it work so well. I guess this has something to do with the hardware performance and the strength of the WiFi connection. 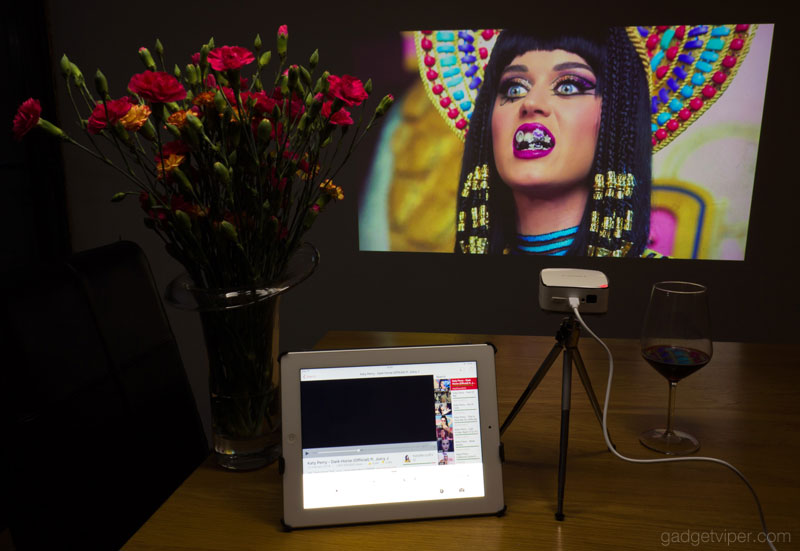 I also tested the projector with my Android Smartphone. I have a free app on there called BubbleUPnP which I’d previously used to stream audio from a device I reviewed a while ago.

To my surprise, the PURIDEA projector was listed as a local renderer.  After selecting it from the list, my phone was ready to cast. It worked equally as well as using Airplay from the iPad. 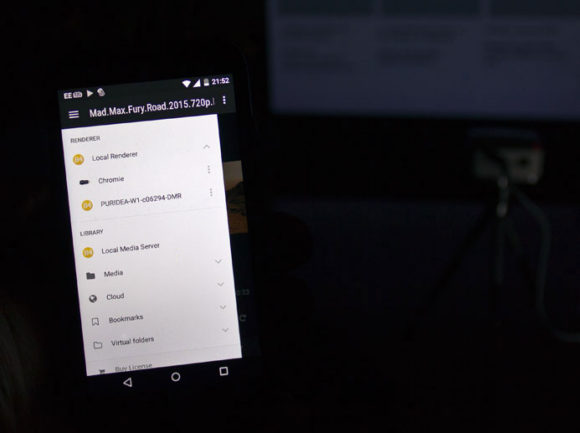 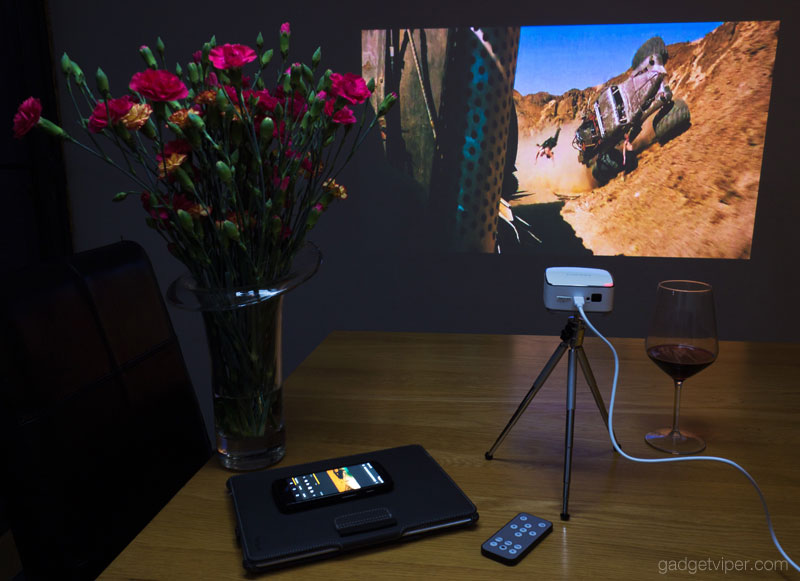 The PURIDEA portable wireless projector is not HD. Its screen resolution is 854 x 480, that’s better than DVD quality, but not quite HD (1280 x 720).  Looking beyond the resolution, the actual picture quality is great. Proof that there’s more to a projector than the amount of Lumens it puts out. Having a relatively low lamp intensity allows for a longer playtime and far less fan noise. As long as the room is nice and dark, the PURIDEA does a fantastic job.

I watched a couple of films projected to a size of around 75 inches and was more than happy with the brightness and the picture quality.

If you get up close to the image you can see the individual pixels, but from a sensible distance, it’s absolutely fine. 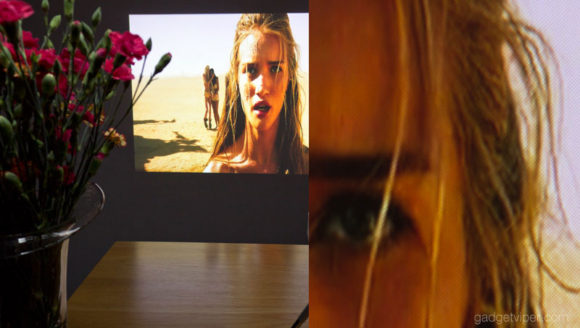 When the room is in complete darkness, the PURIDEA will project even bigger. I watched the film “Her” with the screen pushing 90 Inches. It was almost like being in a cinema, but without the annoying person behind kicking the back of your seat. 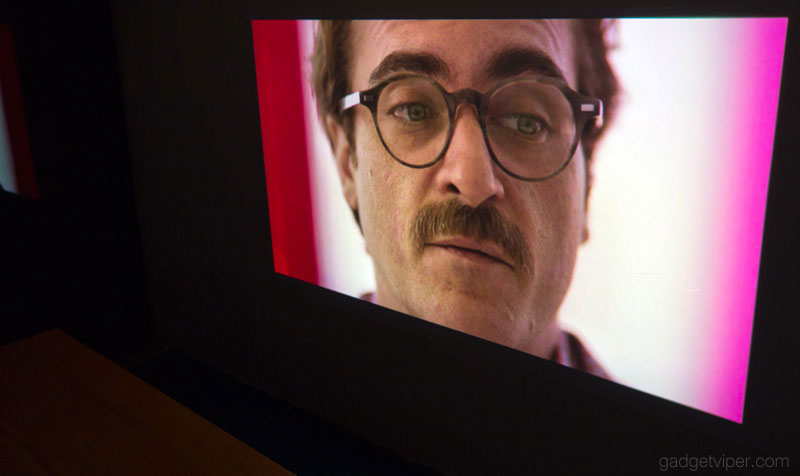 The audio quality is nothing to write home about. It lacks volume and has very little low end. You could get by using it, thanks to the extremely quiet fan, but you’d be mad not to plug a portable speaker or set of headphones into the AUX port.

Portable Bluetooth speakers are relatively inexpensive these days. The PURIDEA wireless projector doesn’t have Bluetooth connectivity, but most speakers come with a 3.5mm audio jack and cable.

PURIDEA make a portable speaker that doubles as an external power bank.  A device like this would be ideal to use with the projector. 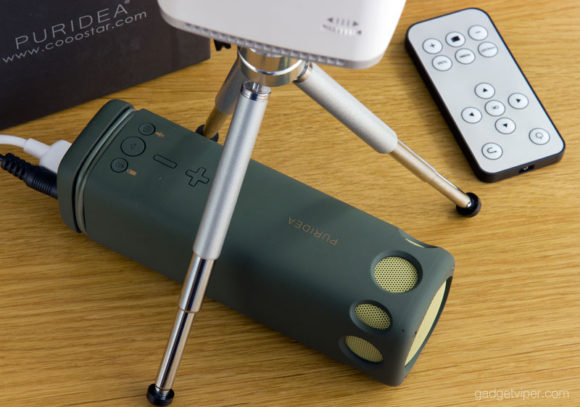 The PURIDEA wireless projector has far surpassed my expectations. Its build quality is great and the simplistic operating system is an absolute pleasure to use. The fan noise is practically non-existent and the picture quality was better than I could have hoped for. A USB input and Bluetooth connectivity would both have been welcome additions. That being said, I haven’t missed either and I actually like how uncluttered the device is. It’s refreshing to find a product that just works.

If PURIDEA had a huge marketing department to push their brand forward, I have no doubt that this mini LED projector would become a best seller. Yes, there are cheaper projectors available, but they’re cheap for a reason. This one is worth every penny.

PURIDEA portable projector – Buy Online
Amazon
price: $259.99*
view
*Product prices and availability are accurate as of the date/time indicated and are subject to change.
more »
Any price and availability information displayed on Amazon at the time of purchase will apply to the purchase of this product.

I hope you found this review useful, if you did, please leave a comment or share it socially – Thanks! 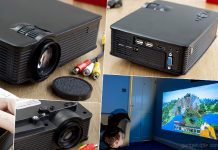 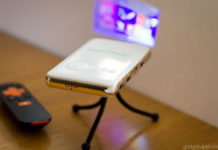