Home Gadgets Nanopresso Review – A Portable Espresso Machine with 18 bars!
Update – Guys, I’ve just reviewed the Nanopresso with the Barista Kit. If you’re considering buying the Nanopresso, then I highly recommend you also grab yourself one, it’s a serious upgrade! Here’s my video review for those that would like to see it in action.

A review and demonstration of the Nanopresso, a portable espresso maker from Wacaco.

Lighter, smaller, easier to pump and yet twice as powerful as its predecessor (the Minipresso). The Nanopresso is set to take outdoor espresso coffee making to the next level.

*Product prices and availability are accurate as of the date/time indicated and are subject to change.
more »
Any price and availability information displayed on Amazon at the time of purchase will apply to the purchase of this product. Free delivery may be subject to a minimum spend amount.
I have five portable espresso machines, the Nanopresso is undoubtedly my favourite and the one I’d recommend.

I’m a huge fan of manual espresso machines. I’d say 80% of all the coffee I drink is extracted from a portable coffee maker. My passion started with the Aeropress which isn’t actually an espresso machine, but it still makes a damn fine coffee. Up until getting my hands on the Nanopresso, I’ve been switching back and forth between the Handpresso and the Staresso.

My experience with these other devices has given me a strong understanding of the intricacies of dialling in the perfect coffee extraction. Armed with this knowledge, I’m confident I can get the best out of the Nanopresso and I hope you find this review and demonstration helpful.

The Nanopresso comes in a good quality retail box. Inside you’ll find a detailed user guide, a warranty card, and a couple of stickers.

The user manual is extremely well illustrated. It includes a detailed step-by-step guide, tips for getting the best results, a troubleshooting section along with details on the cleaning process.

It’s very simple to follow and printed in a total of nine languages. 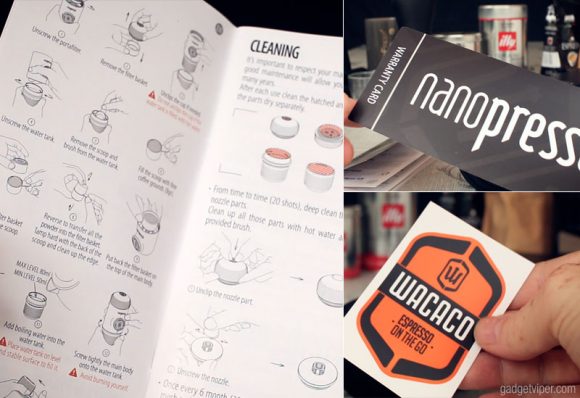 Unlike most portable coffee machines, the Nanopresso comes with a top-quality hard carry case as standard.  The Handpresso has its own similar case, but it’s actually an extra $25.00 on top of the cost of the product. 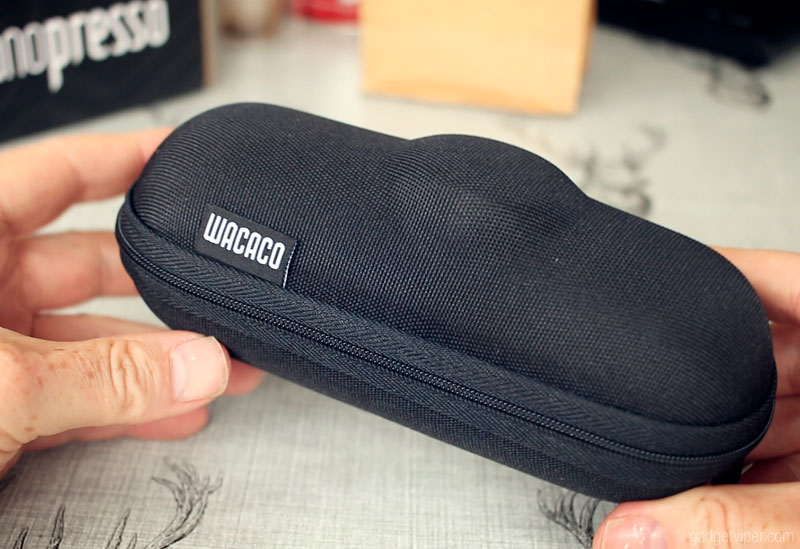 If you intend to use the Nanopresso on your travels, this case will come in super handy. It’s lightweight and moulded perfectly to house the device without taking up hardly any additional space.

3The Design and Build Quality

I’m struggling to describe just how impressed I was handling the Nanopresso for the first time. I don’t want this to sound like a sales pitch, but trust me when I say it’s practically flawless in its design and build quality.

Its capsule shape is a delight to hold and the deep knurled top and bottom provide the perfect grip when tightening and loosening the components. With your thumb and forefinger comfortably resting against the raised edge of the pump it really could not be easier, even with wet hands.

Despite the Nanopresso’s body and components being made from plastic, it somehow feels very robust and solid. That being said, it still comes in at just 333 grams (11.7oz) on my scales.

Weight may not be a huge factor for most people, but if you’re into hiking as I am, every gram counts. In comparison, the Handresso’s weight comes in at almost 500 grams. 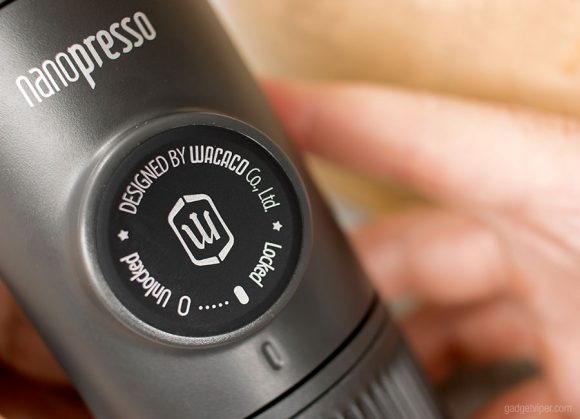 When you disassemble the Nanopresso for the first time, you’ll find seven individual components. Only four of these are essential to the device. Those being the Portafilter, coffee basket, the main body and the water tank. Additionally, there’s also a coffee scoop and cleaning brush, they both fit neatly into the water tank. The Nanopresso also cleverly comes with an Espresso cup that clips securely to the underside. 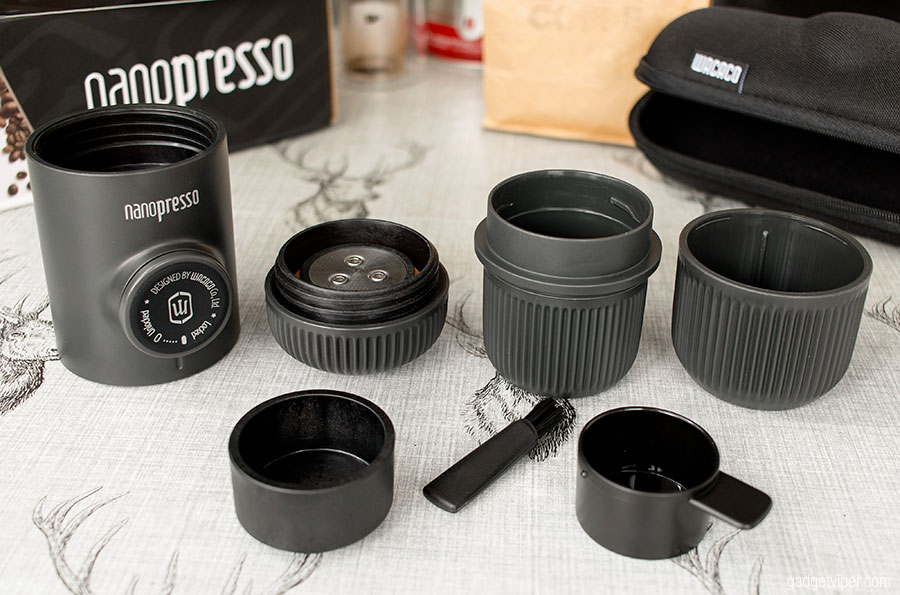 Each item fits together with absolute precision. As hard as I try, I simply cannot find fault in any individual part. Components that require durability, such as the filter basket, are thick and robust.

I have absolutely no doubt that you could bash coffee pucks out of the basket all day long without damaging it. 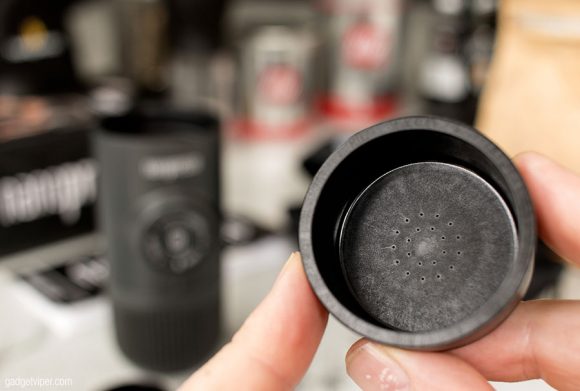 There has clearly been a substantial amount of thought given to the Nanopresso’s design. The water tank requires less than a quarter of a turn to tighten and is impossible to cross thread. As for the portafilter, it screws on so cleanly, it almost causes ASMR tingles up the back of my neck, I kid you not!

Anyway, all of this design and build goodness is irrelevant if the extraction is not up to scratch, so let’s take a look, shall we?

I’ll briefly explain the process here, as I’ve already demonstrated it on my Youtube video.

5My experience with the Nanopresso

I started with the exact same setting on my Hario Mill that I use for my other portable espresso machines and made my first Nanopresso coffee. In front of me was a delicious espresso. It was full of flavour and detail, with good temperature and an impressive looking crema.

Over the last few days, I’ve been experimenting with the grind and I’ve taken it from one extreme to the other. Too fine and the Nanopresso will slow drip during the extraction,  too coarse and the flow will be excessive.

There is a fairly large window for adjustment, so you should have no trouble finding your own sweet spot. 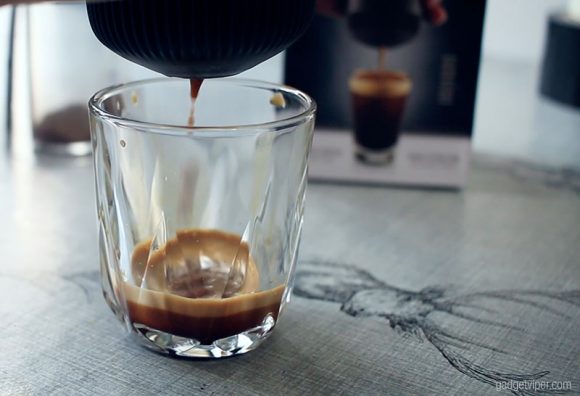 In a perfect scenario, you’ll have a freshly roasted bag of beans at hand along with a suitable grinder. This is not always the case. I have tried three different pre-ground coffees and they all have worked well with the Nanoresso.

6The Versatility of the Nanopresso

For those that need an even easier preparation method, Wacaco has released an NS Adapter. This will allow you to drop a Nespresso capsule inside the portafilter instead of using the filter basket. There’s also a Barista kit to give you a double shot of 16 grams and a larger water capacity of 120ml.

The Nanopresso is my favourite and most used portable espresso machine. It’s lighter, smaller, yet more powerful than my other devices. The piston is as quiet as a mouse and a pleasure to use. The build quality is precise and all elements of the design seem spot on. The integrated espresso cup and the hard carry case make it ideal for travel or for using outdoors. Most importantly, it makes an amazing espresso coffee.

If you guys are thinking about buying a Nanopresso, I would highly recommend getting the Barista Kit with it. The Double Shot basket makes a huge difference, I couldn’t imagine using it without it attached.

*Product prices and availability are accurate as of the date/time indicated and are subject to change.
more »
Any price and availability information displayed on Amazon at the time of purchase will apply to the purchase of this product. Free delivery may be subject to minimum spend amount.
I hope you found this review useful, if you did, please leave a comment below or share it socially – Thanks!
Share129
Tweet
Share
Reddit
Pin2
WhatsApp
131 Shares
Summary
Reviewer
Simon Tunnard
Review Date
2020-03-23
Reviewed Item
Wacaco Nanopresso Portable Espresso Machine
Author Rating
5 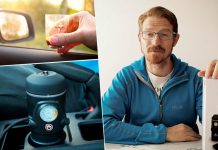 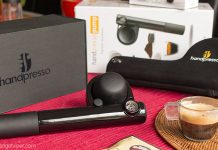 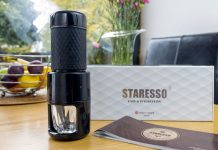 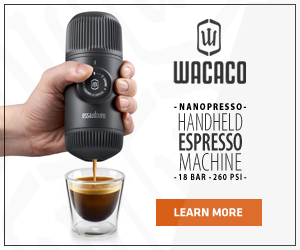